Our US road trip kicked off in the backcountry of California. Our only plan was to hike, climb and eat our way around the western states. We grabbed a map and looked up locations on the way to Vegas.

That was how we ended up at Big Bear. 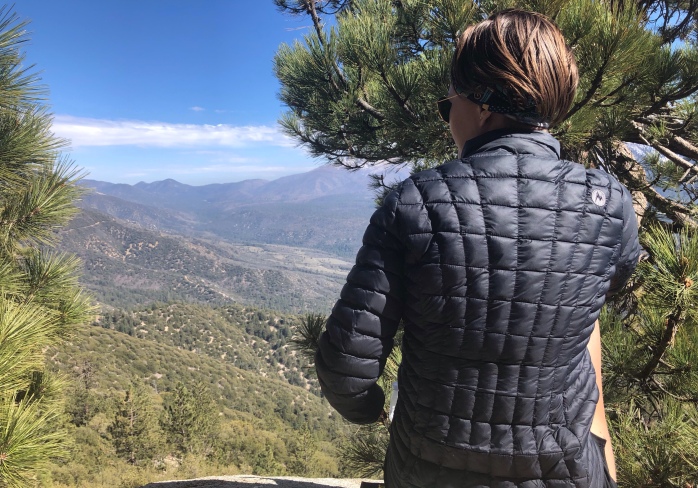 The country town is nestled in San Bernadino two hours outside Los Angeles. Within minutes the scenery from your car window transforms from sunny suburbia to snow-topped peaks as you snake your way up winding mountain roads. Hordes of hikers, bikers and fishermen and women descend on the town in the summer months to explore the wilderness; Big Bear lake is surrounded by forests full of trails. The town is also home to rustic log cabins which house skiers and snowboarders in the winter. The snow had not yet melted, even in April, and some winter sports could still be seen. This was a stark contrast to the warm LA beaches we had left behind. The town is rich in history as well as the outdoors, having played a part during the Californian Gold Rush.

It’s my kind of town.

There was only one problem…

For the first time I would hike into the realm of a real predator. Before leaving New Zealand I had the unfortunate realisation that all outdoor activities I enjoy would be in bear country in the USA. Growing up in London I never had to deal with an animal more frightening than a fox. Urban streets are home to a different sort of wilderness, a different type of predator. My two years in Australia had introduced me to some wild animals – the land down under is crawling with poisonous snakes and spiders – but this would be my first time entering the zone of a predator with claws and teeth.

To add context to my concerns here is a photo of a stuffed bear we came across before our hike! 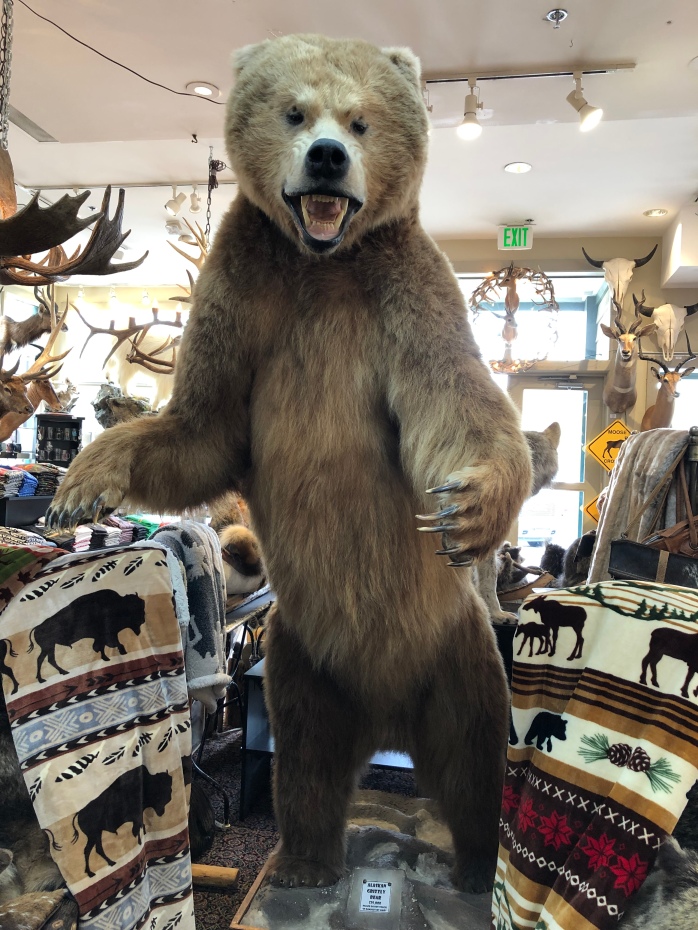 Big Bear town did not calm my nerves. Bear signs line the roads and the locals love to display ferocious bear carvings in their yards. We arrived in town late and camp grounds were full for the Easter Weekend. For plan B we pulled up on a deserted wilderness road right next to a warning bear sign. The darkness swallowed the forest around us.

Fraser couldn’t understand why I was scared.

We visited an outdoor store to purchase bear spray before hiking. These are pressurised canisters of pepper spray used to deter attacking bears. The assistant was helpful in answering my many, many questions about the safety of our hike:

“Don’t worry about bears at Pineknot! You’re more likely to be attacked by a mountain lion… But don’t worry, the spray works on those too.”

I was not appeased by this news.

Pineknot Trail is a picturesque 12.8km walk to-and-from the Grand Viewpoint of Big Bear. The landscape is incredibly varied in the spring. The trail began warm, dry and dusty with a moderately steep ascent. A short way up small patches of ice appeared, seeming oddly out of place in the sunshine. Further on streams of meltwater flooded the pathways, bridged with deadfall. 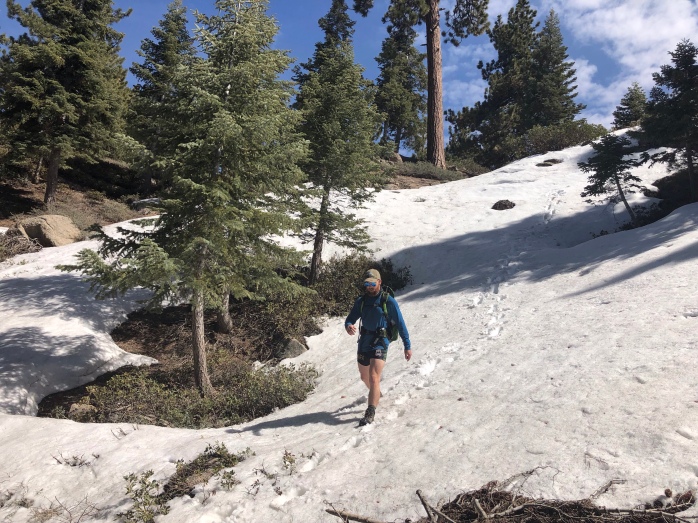 Next, large boulders and rocky outcrops appeared, replacing the dusty shrubs below. The higher we climbed the thicker the ice became until it covered entire sections of the trail. The temperature dropped as the trees grew denser around us and the wind whipped through exposed areas. 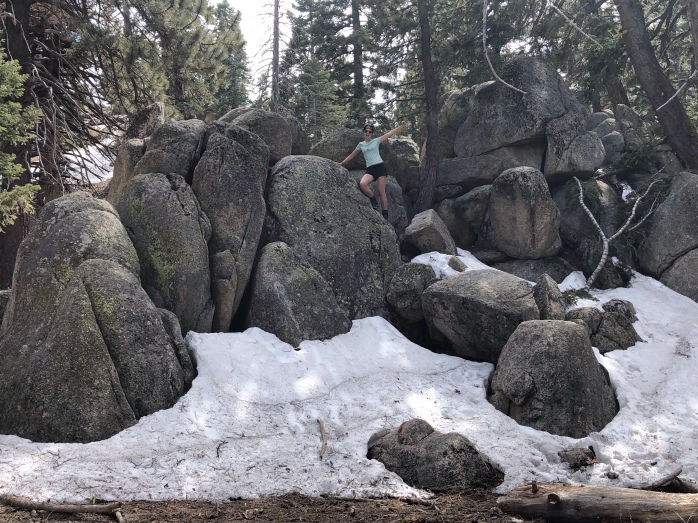 The path was buzzing with tourists, families and dog walkers. A quick glance revealed we were the only ones armed with bear spray. I was surprised to see people walking with children, toddlers and even babies. I had expected the threats of bears and mountain lions to keep people away. Naturally I insisted Fraser wore the bear spray on his Osprey strap, ready for sudden attacks. He grumbled when we realised we looked like OTT tourists, but he wore it anyway 🙂

The trail opens up onto an exposed viewpoint with panoramic views of the tree-studded valleys below. Pine trees dominate the picture, interspersed with rocks and boulders. It was unlike any viewpoint I have seen in New Zealand and beautiful in its own way. 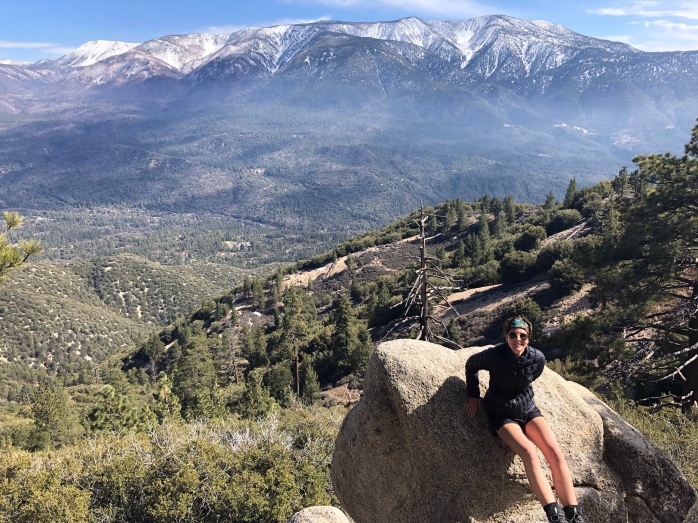 The Grand Viewpoint was packed when we arrived but by the time we had taken our photos we were the only two remaining. Dusk was approaching and I didn’t want to fall behind. The spring temperatures were dropping rapidly and the sun was low in the sky. We descended quickly, navigating the familiar terrain with ease.

I left the hike relieved to survive but secretly disappointed I didn’t catch a glimpse of a bear. It took us 3.5 hours (including lunch and many photo stops) to cover the 12.8km.

We continued our road trip East and I was glad to leave bear country behind. We took the mountain road down from Big Bear and found ourselves in a vast desert valley; roads stretched flat and straight as far as the eye could see; snow-capped mountains imposed on the valley, glowering down like giants, juxtaposed against the parched land below. It was interesting to see mobile homers scattered throughout the desert, miles from any town. The land looked inhospitable and unforgiving. It couldn’t be more different to Big Bear.

We spent the roaring Saturday night at a local saloon, the Joshua Tree Bar and Grill. Beer flowed, musicians twanged and the burgers were delicious. It was just like in the movies. We were the only people in the place without an American accent and the Pollen Collective entertained us with a real American performance.

Stepping into bear country was an enlightening experience. The sense of danger felt as real and immediate to me as stepping in front of a car. The locals, however, were completely unconcerned. This muddled my high-risk/low-risk radar. If you don’t live in the land of predators it’s a difficult danger to judge; hiking is dangerous yet not dangerous at the same time. I now reason that bear country in North America is the same as the ocean in Australia; if you choose to venture in, you accept the risk and forget about it.

I’m undecided as to whether sharks or bears are more frightening… For now, we continue our journey to Joshua Tree National Park. 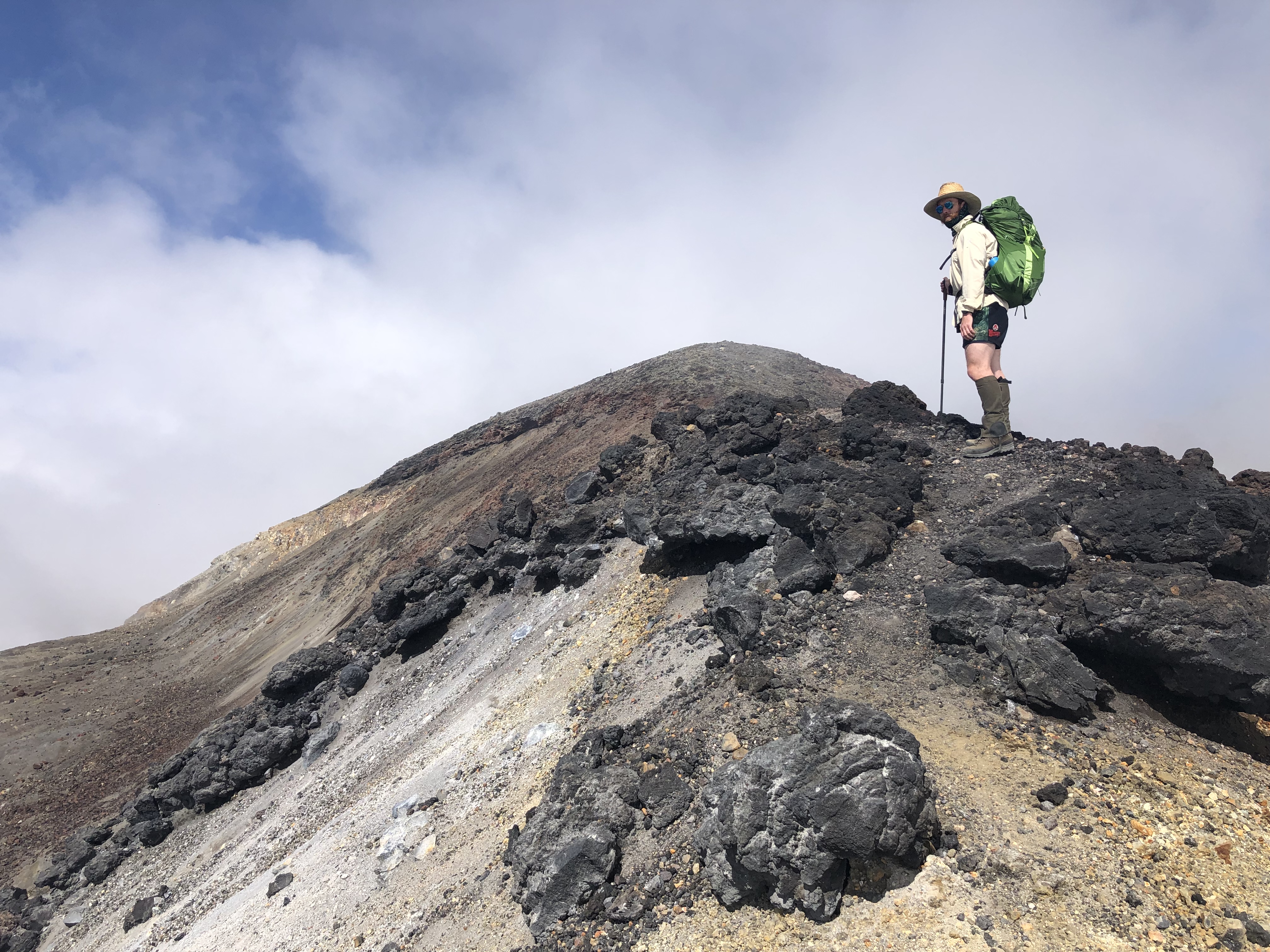